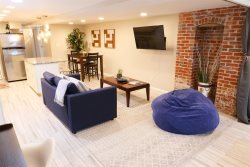 Once primarily a neighborhood of middle-class African Americans, the diversity of Bloomingdale has grown with the neighborhood and the streets today tell a different story. Young mothers sipping coffee and sharing stories at The Big Bear Cafe, hipsters and college students cruising on bikes and yogis on route to class. An authentic urban neighborhood with a great sense of community where people hang out on their porches, play wiffle ball in the streets, dress up for fun Halloween block parties and pretty much everyone knows your name.

A small neighborhood of only 12 blocks, Bloomingdale lies just west of North Capitol Street on the borders of Shaw and on the Greater U Street Heritage Trail. Stately old-timey Victorian row houses with colorful turrets and porch-front homes add to the turn of century charm! You may have even spotted the colorful turrets on the opening credits of Netflixs House of Cards. Yep, thats Bloomingdale! The streets are friendly, so gets get exploring.

Tucked away down an alley behind stately row houses in Bloomingdales center is Crispus Attucks Park, known locally as The Cave Yard or The Secret Park, a great place to picnic under the trees and you may even stumble across a great community event to mingle with the locals. If you fancy a stroll, the historic neighborhood of LeDroit Park is a pretty historic place to explore and a short stroll or bike ride away. History buffs will appreciate the Greater U Street Heritage Trail, although not in our neighborhood its close by with plenty of historic points of interest. Things are picking up in Bloomingdale on the social scene with new bars, cafs and restaurants popping up all the time. Unwind to a little funk fusion by Granny & the Boys at Showtime, or share your talent at open mic night at Boundary Stone, a great Whiskey Bar. There are no major grocery stores in Bloomingdale so its off to the market we go. The Sunday market across from the playground is the place to go for not only great fresh produce and treats but a glimpse into local life in Bloomingdale and the greatest Bodega in the city, Timor, is right here on our streets. If you are looking for a little more than a market treat, head to Rhode Island Avenue and First Street NM, the culinary heart of Bloomingdale with loads of great eateries and the whimsical bicycle fence! Youre sure to receive a warm welcome in Bloomingdale!

Metro: Theres no Metro station in Bloomingdale yet the heart of Bloomingdale is a 10- to 15-minute walk to the Shaw-Howard U metro stop on the Green & Yellow lines or 20 minutes to NoMa-Gallaudet U on the Red Line. You can pretty much get anywhere faster than driving, but if you are driving the Interstate 395 on-ramp is about a mile away. Buses run frequently along Florida and Rhode Island avenues and there are many bus lines that dissect the area. The G2 runs from Howard University south to P Street, then west to Georgetown. The G8 runs along Rhode Island Avenue NW and goes into the heart of downtown or up north through Brookland to Woodridge. The 90, 92 and 96 cut along Florida Avenue, making trips down to H Street or up to Woodley Park and the 80 line travels along North Capitol and over to Foggy Bottom. You can also find Capital Bikeshare stations at the corners of R Street and Florida Avenue NW and up at First Street and Rhode Island Avenue NW.