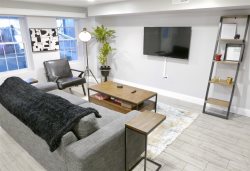 Bordering on Logan Circle, the vibrant urban neighborhood of Shaw lies between 11th Street NW and New Jersey Avenue NW, just a stone’s throw from Washington’s vibrant U Street Corridor, the part of the city that never sleeps (also famously known as “Black Broadway”), and The Greater U Street Heritage Trail. Once the cultural hub of DC’s Afro-culture, Shaw is now a creative hub of indie stores, trendy galleries, restaurants, coffee shops and sidewalk cafe's.

The birthplace of Duke Ellington, Shaw was devastated by the 1968 riots but urban renewal and revival over time has seen it rise up into a vibrant and eclectic community of millennials, young urbanites and students (thanks to the nearby Howard University), yet all the time hanging dear to its deep African-American roots, small-town feel and close knit community.

There’s something here for everyone. Your little ones have space to play at Westminster Playground, the teens will love the chilled vibe of the Shaw Skate Park and if you’re travelling with your pooch (which you should as Washington DC is super pet-friendly) he’ll have plenty of mates to chase at the Shaw Dog Park. Shaw is a great place to drink beer too so stop into a local brewery for some tasty suds then head to Bens Chili Bowl, a historic Washington landmark that has been serving the best chili bowl to locals and visitors since before the 1968 riots!

There are great concert halls such as the Lincoln and Howard Theatres, that once graced the likes of Marvin Gaye, James Brown and Ella Fitzgerald, the Howard Theatre now being home to the Duke Ellington Statue. All in a day’s play you can search for vintage finds at GoodWoods, browse the isles of Giant at the City Market at O, sip coffee in the quirky Blagden Alley (be sure to check out the murals at the outdoor DC Alley Museum), pay tribute to African-American Civil War soldiers at the Memorial and end your day sipping cocktails on 7th. Shaw gets a little sleepier at night but if you’re up for a night on the town, some of DC’s newest hotspots are nearby on 14th and of course, there’s U-Street. Welcome to Shaw - It’s fun, funky and a fantastic place to be.

Metro: Shaw is served by Shaw-Howard University Metro System, nearby U Street and Mount Vernon Square Metro stations. There is a bus service within Shaw, which has several routes that connects the area with the Waterfront and Silver Spring via 7th Street. The G2 bus connects Georgetown University and Howard University.