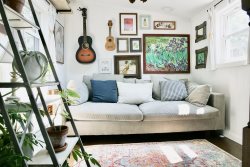 Washington D.C. is our nation’s capital and political epicenter, a place where awe-struck tourists explore the grand boulevards and iconic monuments. It is where our locals call home, where families gather, students socialize and law-makers rest their weary bones come nightfall. We urge you to step a little off the beaten path and explore the culture of our diverse neighborhoods.

Home Sweet City has handpicked a fine selection of short term vacation rentals throughout the beautiful neighborhoods of Washington D.C. area to ensure that your stay is perfect. Enjoy contemporary comfort in a beautiful brownstone or stay just steps away from Capitol Hill in a modern furnished apartment. The tree-lined neighborhoods that unfold a unique blend of modern day living and historic architecture that speaks of a bygone era. Take a stroll along the Mount Vernon Trail, scenically winding its way along the Potomac River with idyllic vistas of Washington’s monuments, hail a cab, take the Metro or rent a cruiser? Our vibrant and diverse neighborhoods invite you to explore. Welcome to Washington D.C.!

Georgetown
Once primarily a neighborhood of middle-class African Americans, the diversity of Bloomingdale has grown with the neighborhood and the streets today tell a different story. Young mothers sipping coffee and sharing stories at The Big Bear Cafe, hipsters and college students cruising on bikes and yogis en route to class. Learn More

Brookland
Another transformed neighborhood often referred to by locals as 'little Italy' it is the home to Catholic University and The Basilica, the shrine is the largest Catholic church in the United States and North America, one of the ten largest churches in the world, and the tallest habitable building in Washington, D.C. The homes are large, and each seem to have their own unique charm, enjoy whilst taking a stroll amid tree lined streets. Some recent development has brought some great new bars and restaurants nestled in by the Metro station and Catholic University campus. The neighborhood has recently become more and more popular with young families. Learn More

Columbia Heights
Steadily transforming from edgy to inviting, Columbia Heights’ renaissance is due in part to a recent influx of big box retailers and mainstream entertainment options. These suburban conveniences convivially blend with Columbia Heights’ urban sensibilities—ethnic eateries, one-of-a-kind dive bars, and family-run bakeries populate its mural-covered side streets. It’s still advised to practice caution when enjoying the neighborhood by night, as Columbia Heights has yet to fully shed its gritty reputation. Learn More

Capitol Hill
Capitol Hill owes its name to the iconic congressional building that overlooks the neighborhood. Although its senators and representatives attend to serious business, Capitol Hill makes room for frivolity. Trading stuffiness for enthusiasm, the neighborhood sponsors street fairs and supports secondhand shops and eclectic restaurants. It’s easy to navigate to and away from Capitol Hill, but who wants to leave a community where you can buy fresh lemonade from a neighbor’s enterprising preschooler? Learn More

Dupont Circle
Legislation isn’t made in Dupont Circle, but this hub of activity often feels like D.C.’s true city center. This trendsetting neighborhood boasts more long-term residents than summer interns, lending it a lived-in quality that’s uncommon in a city of new arrivals. Dupont Circle’s around-the-clock energy invites people to come for brunch and stay until last call, while its parks attract residents to relax as they observe their neighbors protesting, painting, or reading the afternoon away. Learn More

Downtown Penn Quarter
With business people and briefcases crowding the sidewalks to and from work (and slow-walking not an option), Downtown D.C. feels like any other urban downtown. But it sure doesn't look like them—a scarcity of skyscrapers lends an open, transparent air, allowing this metropolis to make its own political statement. Beyond the hustle and bustle of Downtown's main corridors, Penn Quarter provides locals with a splash of culture and entertainment when their workdays end. Learn More

Logan Circle
Washington D.C. is known for its infamous traffic circles, yet Logan Circle is not just a traffic circle. It is D.C.’s only residential traffic circle boasting a statue of Civil War General John Logan on his horse, back-dropped by a Victorian skyline of the turrets and towers of grand Victorian mansions that line the streets. Learn More

Bloomingdale
Once primarily a neighborhood of middle-class African Americans, the diversity of Bloomingdale has grown with the neighborhood and the streets today tell a different story. Young mothers sipping coffee and sharing stories at The Big Bear Cafe, hipsters and college students cruising on bikes and yogis on route to class. An authentic urban neighborhood with a great sense of community where people hang out on their porches, play wiffle ball in the streets, dress up for fun Halloween block parties and pretty much everyone knows your name. Learn More